So, I logged on to discover… MAILS FILLED WITH PETS 😀 THANK YOOOOU T~T <3 Now, I just have the Speckled Blurrg and Tundra Nekarr Cat to go for pets 😀 Yay! Also got a Remote Control Spaceship <3 And the Mounts are down a bit more... to like 3 million. Title is like 200K. It's nice to feel progress <3 Besides that, due to some discussion on certain codexes... why are the "Survived" codexes so buggy? Some I obviously won't have yet, but others... not so much. Ones I am missing ( Bolded with a * means I should have it -_-): Survived: Warlord Kephess (Nightmare Mode) Survived: Terror from Beyond (Story) *
Survived: Kephess the Undying (Story) *
Got it! 😀
Got it! Yay!


And of course, Customer Support can’t fix achievement ones :/ Why I still have 2 bugged PVP… …I really should try and win that stupid match and hit valor rank 100 ._. but ew pvp. I know if I do the operations enough, the survived ones SHOULD activate eventually… but I hate repetition .___.

In a different note, I wish there was a good way people in the pet channel could post what pets and stuff they still need 🙁

and now back to NM EC

So, I was taken to TfB HM tonight as the usual sage is away this week. I wish I could say I did awesome, but I know I was kind of off. My reflexes were kind of iffy due to my sinus headache so my overheal was worse than usual (I’m pretty good at healing but not so much making sure I don’t heal someone to death) 🙁 Will probably head to bed soon. Regardless, I did have fun~

Also, Drummer said something really sweet T~T <3 Which made my night~ Annnnd I got the mainhand! Which removes 3 things from my list of horribleness. We will be attempting EC NM tomorrow… I’m scared @-@

And I got another codex from Ancient Hypergate…another from the cubes @-@ Just need to win a match and I should (hopefully) be done.

There is always something awkward when you want to try and avoid your main character as to not run into someone :/

As it is, I will most likely be filling in for EDIT: Looks like it’ll be HM EC! Still makes me nervous though 🙁 Note to self: need all 27 armorings except for legs. 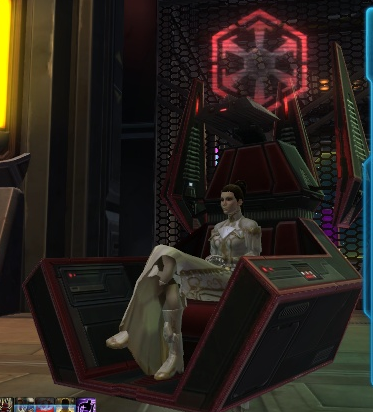 YAY. …the skirt is kind of broken though. but still! yay!

but yes, speeders to go: END_OF_DOCUMENT_TOKEN_TO_BE_REPLACED

So, Tuesday is 1.6. It’s also the fireworks and I’m pretty sure it’ll probably be any special Cartel Market items or Anniversary/Life Day stuff (and if not, Life Day will probably be either next week or the week after).

I’m kind of excited, but I’m mostly stressing. Still have incomplete goals (Speeders, Gear, Codexes, Dreadtooth…) and I’m going to have to add on to the codexes :/ Should probably look up and see what Ancient Hypergates has…

I’m worried they may actually remove past cartel boxes when they add in new ones which would cause more prices to raise… And with the throne finally under 2 million, I’d rather not see it shoot back up.

Shall try and stay positive @-@ but mostly just paranoid 🙁 As it is, I have to work that day so I may not be able to see it right away. There’s a chance it may even be up early even though delays seem more common.

Unfortunately, I still don’t understand Ancient Hypergates as well, but I know the warzone is going to suck as a healer :/

…I wish they’d remove the ranked requirement on that one stupid speeder ._.

EDIT: EEEE 😀 I GOT THE HM EC MOUNT YAY! <3 Edit 2: ack, forgot about the new space missions... will probably pick them all up and cry

1. Nightmare EC (I will have to add that stupid tank mount to my list. I also have only a week to try and get all the speeders I still need… I don’t see myself getting the Ranked Warzone one–EC HM one is iffy… but I can always try to save for the ones I need to buy*)
2. HK-51 and new dailies + new world boss. I will be on immediately when patch goes up. FYI CERTAIN PEOPLE WHO KNOW WHO THEY ARE.
3. The Cartel Market

So, in Nightmare EC, there was confirmed there would be a pet. I do feel it may be the Wonderous Egg (afterall, how did that rumor start?), but there is no confirmation… if it is though, at least it can be traded so I can just hope someone pities my sad existence outside the doorway.

I’ve already prepared enough gifts to get HK to 10K so yay. I’ll probably be camping myself near where the NPC will spawn the night before so I can grab the quest and head on over to Section X. I don’t really care about getting him geared out right away–I don’t expect to use him much afterall. I just want to see is story.

Still mixed feelings on the Cartel Market. Apparently it will be 5 dollars for 450 Cartel Coins so a bit under a direct transition which kind of stinks.. however, that’s been the kind of thing most cash shops have done lately :/ Still stinks though. I’ll be getting 2800 complementary though… plus a bonus 250 during the actual launch. I still feel it may be slightly off though… and well, I hope that 500 per subscribed month after launch is true. That’d be nice. I plan on buying the speeder and pet available plus 2 of the tops…rest will be spent on packs though.

I just really wish they’d make a list of everything you can get ._. Regardless, I have prepared a trade page and everyone in the Pet Channel is awesome so… shall just hope for the best.

*I have been asked a lot why I didn’t just buy these when they were cheaper. To be honest, if I could, I would have. However, my choices were between stuff that would be GONE and thus, would probably go up to ridiculous points or just the speeders sticking around. In the end, the money went towards the Koreallis Speeders, one of the Prime speeders that was rumored to be going, and to help my boyfriend get his white lightsaber crystal. Sure, I wanted one too, but I knew he wanted it more so that is where all my money went. And it sucks I couldn’t get the speeders at a lower price, but I don’t regret what I did use the credits for.

Yep, I finally got my gloves from EC HM which means I have the stats I want along with a 4-set bonus. Of course, I do pretty well with my force management (I’d like to think so anyway!) so if something happens and I have to kill it… I have no problem doing so 😛 Unfortunately, no mount drop which really sucked 🙁

Anyway, I may get to do TfB on Monday! I hope we do really well and I can finally get my Deep Wriggler T~T That would be the best thing ever.

edit: and now I have to suffer through Teral V T___T darn you, Teral V.

…despite feeling like utter crud today, ended up going on a 8-man HM EC run. Our usual run didn’t happen due to it being Thanksgiving in Canada so I was taken along to this one.

More or less, it went well. Kephess even went down despite the glitches of some nightmare mechanics getting in there.

now if I could just stop sucking at rolls.

especially in things I’d rather not see ever again unless helping someone out ._.

So, we have a few follow-ups to things…

1. The Cave – It totally slipped my mind to make a post besides just updating the cave post. I will continue to just put theories there, but for those who have missed it, a new clue was released:

This obviously brings up a few issues. Exactly what is being referred to with the second sentence–the red text itself (“You feel a strange and chilling presence.”) or the first thing he said?

Secondly, the first part alone… This could mean:
A. It’s something not in game right now
and/or
B. Just something that can’t be done right away

I’m going to quote one of my comments real quick in reference to B:

Another idea is just that it requires multiple people to have something so you wouldn’t be able to do it right away. Kind of furthers my wondering over the first high drop rate pet as you’d only be able to get 1 a week so it would be 16 weeks (4 months) of completing HM TfB before everyone would have one.

…that’d be so cruel though.

As Telanis pointed out, technically 16 people could just go in after and then, if 16 people finished, and it was a locked out instance, yes, any 16 can go. On the otherhand, if it wasn’t, you’d need to have a group together for that first boss and the mobs on the way to the second boss.

Going on to the next follow-ups… The Wonderous Egg and Lobelode from a Dev:

To the Lobelode and the Wonderous Egg, the answer is that these two pets are not yet distributed in-game. I think this may have been a case of the community getting mis-informed by data mining.

I responded back with my concerns on the Wonderous Egg and why I had asked (The Lobelode doesn’t surprise me much, but it is nice to have that confirmed) and he asked for some links where I had been told about the Wonderous Egg and seen the information. Hoping for a response back as that is something he will definitely try and get more information on as it’s a very…odd situation.

Regardless, hopefully this means the fully confirmed answers aren’t far off and we’ll know soon. I will be moving the Lobelode off the Pet List for now.