While we had planned to get some experience lined up and have the game running to start patching, due to general allergy suffering of sneezing your brain out and general craziness in real life besides that, things haven’t really worked out. I still have yet to even find a chance to go to Gamestop and Best Buy to check for cards 🙁 Which I really want to do as everyone has been so nice and I want to throw cards at you all. T~T

As it is, several things have made me feel sad getting on, such as:
1. Incomplete pet collection
2. Feeling uncomfortable whenever I get on due to hate.
3. Just general discouragement with the way certain things are done. I’ve made enough rants on raids and how I wish HM and NM were solely for gear and didn’t have vanity items attached to them so I will resist breaking into that again.
4. Still hating the Reputation and Achievement systems. <-- this one tends to confuse people a lot, so I will explain. More or less, I do not mind them specifically, but my main issues with the reputation system are: 1. It's a late system and the fact that it had to be mixed with past things. I really wish it was just the Gree event and then continued to Makeb. I think Makeb does the system great, but them trying to force in on past things is just kind of annoying. ----This is especially apparent where with Voss, you have to repeatedly do a quest for the 4 heroics for reputation. ----I know they have quest logs. I have asked Customer Support before if I have done a quest when I can't get it to appear because there sadly are not visible quest logs for members and have gotten an answer everytime. There is no reason they couldn't have credited people based on the quests they did. 2. The Limit per week. I would think the reputation system is so you play more by re-doing things and the limit kind of pauses that? I get that it probably is made to extend time, but it really makes it hard to bother. Kind of like when I was hunting for pets–the 2 times a week for raids sucked–at least make story mode constant =( not like gear in those modes is anything helpful. Or you know, just stop putting vanity stuff in raids–that’d be nice. Story for the story and HM and NM for gear grinding. And then I can just do my story and never see them again 😀 Moving back to my original sentiment, I repeatedly did Lost Island all day until I got my midnight Rakling. I was motivated. I was ready. This takes my ready and tosses it out the window.
3. The fact that we can’t purchase ahead of time and just not be able to activate it until the rank. I’m a paranoid person after seeing past things be removed and due to the limit, I can’t even do a rush of urgency. It just makes me feel there’s no hope whatsoever.
4. The space missions only being for HM space missions. Ignoring that I feel it should be general Republic/Imperial stuff for any quests in relation to those, the fact that it’s not all the space missions stinks. I can’t even DO the HM space missions 🙁

I think the Achievement system does do a better job overall–with it actually taking account of what you’ve done, but parts of it just frustrate me a lot. And I can see myself torturing myself to try and get it done.

and no, Duhtect, I won’t sell you my crate. Stop it. XP

which will bring my tree back to what it was + new skills. I still think it’s stupid it expanded wide instead of up, but whatever… I will probably do Will of the Jedi (2), 2 in Telekinetic Defense, and then my last 1 in Pain Bearer.

Edit: Okay, can officially say I’m annoyed at achievements due to so many needing to be redone -_- 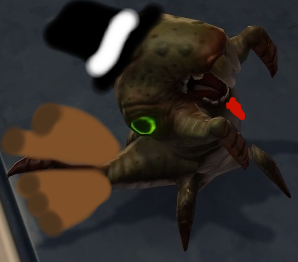 Got to go into TfB today surprisingly. I wasn’t supposed to but something came up so I was brought along.

Unfortunately, this will also be my last go. Not just because I will be busy tomorrow (not that I’d have been taken to go on 8-man anyway), but because 3 sages is just not…good to take on HM 16-man TfB. I’ll just glare about the nerf I guess and wish I was a better healer so that wouldn’t matter. But I suppose I won’t ever be good enough and thus, my Deep Wriggler dreams will be put off much much longer 🙁 (and my stress will grow and I shall probably get more sad)

On a happier note, Prongs is awesome and helped me get this beautiful legacy ship stuff and I wish I could be as happy as I should be (and I know I’ll be ecstatic later), but right now, I don’t think anyone would believe these tears are “happy”. 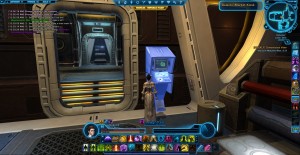 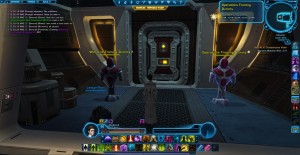 and why can’t sages be considered as awesome as scoundrels and commandos ._.

Even if I may have improved from those stupid nerfs for sages/sorcerers during 1.2 and even if one is kind of less horrible with the upcoming new heal for sages (sadly, the nerf to Deliverance still exists giving the “main” healing class the slowest big heal), everytime I hear how much sages suck compared to another healing class and/or how much better healing scoundrels/commandos are, a little bit of my heart breaks.

It just kind of sucks. I feel really bad for anyone who can’t play how they like. My thirst for discovery continues, but I can’t help and feel a little demotivated every time I hear things like that.

For the patch notes 🙂 Currently patching on my computer and downloading on my laptop as we speak. Only disappointment is it looks like no character transfers…which is really depressing T__T (Also, looks like no new pets officially mentioned…however, that doesn’t mean much. I kind of hope not though as we have enough mysteries on our hands with the Wonderous/Wondrous Egg/Orochick and who knows what with the Lobelode)

Regardless, some highlights and things I found interesting from the patch notes:
-Obviously Terror from Beyond is out. The new gear is “Dread Guard” (it sounds silly)

-The ground targeting reticule is no longer cleared when a channeled ability completes channeling. (Very nice. This was always a bit frustrating/confusing in PVP)

-Players no longer receive the error message “You cannot cast while moving” when moving, stopping, and then immediately using a ground-targeted ability. (Yay!)

END_OF_DOCUMENT_TOKEN_TO_BE_REPLACED

So, this developer blog went up and it is full of all kinds of interesting class changes.

Shall go in order:

This…kind of stinks. Our stun is now only 10 meters…I mean, I guess we may be that close in PVE sometimes anyway when we need to stun, but it sucks for PVP.

so not good. I can’t aim at all so umm…chances of me hitting someone (which I already had a hard enough time being in range with a full circle) is pretty bad. Also incredibly useless when you are trying to get rid of someone behind you. Yay for at least being instant though but…

Also Resolve changes where if someone is stunned and someone else used it at the same time, it won’t count towards it as it didn’t actually stun the person.

So, had an…interesting Long Island run. It definitely didn’t go well, but what was really iffy was during Smash-lava pit guy’s Smash attack… instead of jumping up…he jumped back and knocked us all off 😐 I really need to stop glitching things. *feels like she’s bad luck*

In a different note, Amidaia is level 49! About to get back to playing her right now so hopefully level 50 isn’t far off~ We are slowly making our way through Voss and her story has definitely gotten more and more interesting (even if the betrayals aren’t a surprise).

I think I still prefer Sage more (even if I guessed Syo was evil right away–it actually surprised me when I was actually right), if only because I felt we were able to do more about it. And plus, the overall faction story I disagreed less with some of the options.

Being a healer can be incredibly frustrating. Besides the tendency to be blamed, there is also a lot expected of you.

I get about 2-3 requests to heal something everytime I log in. And I have a lot of trouble saying no, but sometimes, I’m only popping in for a little bit or I already promised to do something with someone else and people don’t understand that.

I’m not your personal healer. Stop expecting me to be. Stop guilt tripping me if I say I can’t right now.

I don’t have interest in what you’re doing. If I do accept, it is because I am helping you out. The least you can do is not take advantage of it and expect me to drop everything immediately. Seriously.

In a happier note, I found someone who could make the Resolve Hilt 26 for me! Would be about 350K-500K if I supply everything. Not bad. Too bad it’d cost me an extra 500K to buy 6 Molecular Stabilizers and 2 Matrix thingys from my guild which is where the problem with cost comes in :/