Remember that old F.A.Q. Question? Well, it’s back up.

In addition to the Cartel Coins, each of our retail partners offer an exclusive mini-pet that will be added to your account when you redeem your Cartel Coins Card here on this website.
The currently available pets are:

BestBuy: Arctic Manka Lynx – Renowned for its speed and grace, this Arctic Manka Lynx will loyally follow you on your adventures across the galaxy.
GameStop: Lobelode – The Lobelode is hardy and persistent, at home in even the most dangerous and exotic environments you could visit.
EU Retailers: Forest Nekarr Cat – Known for its agility and viciousness, the Forest Nekarr Cat will loyally explore the galaxy with you.

The one in bold is the newest edition–the pet that has only started popping up recently. The question now is if they are still from space pirate packs or if this is really where they were from all along. 🙁

Also, the Gree Event is returning tomorrow so for those who were good and don’t suck like me, you should be able to get more stuff!

Yes, it does exist. No, there are currently no confirmations on how to get it (although, again, it does exist–proof of that has been given).

My idea is it was forgotten from the Space Pirate’s Cartel Pack (as that is where it was originally rumored to be in) and is a late addition.

This, of course, opens up the idea that there could be other late additions. If you see someone selling the Forest Nekarr Cat, please contact the seller and see where they got it. Edit: Confirmed to be from the Space Pirate Cartel Pack.

…no seriously, please. (and dwedtoof)

Edit: And to add, from the 2.0 patch notes:
“Dread Master Styrak now has a chance to drop a Kell Dragon vanity pet.”

…*sigh* at least it doesn’t sound like it is hard mode only :/

Skip Tracer Cartel Pack is now out costing 360 like usual. I’ve finished patching and will be probably buy some to check it out. I’m expecting pets and knowing my luck, I will probably not get any of them.

I think I’ll just have a nervous breakdown over here :3

Apparently the backflip emote is out and the rare ship pets may be out but we shall see… Also a Holo-Shrub disguise which sounds neat.

Box 4:
Killik Drone Larva <--- more yesing. Ball Toss Box 5: Ubrikki Crimson Claw Black Womp Weasel ^yesing continued Box 6 (and final box): White Womp Weasel Black Womp Weasel (This will be given to someone in the Pet channel! Whoever still needs it once it unbinds~) ^this box also gave me 5 Molecular Stabilizers. Thank you, Box #6 T~T Edit: so, items I need/want out of what I know:

obviously, I want any emotes/mounts/moods/pets I haven’t heard about yet though. That’s kind of a given. And then for Cartel stuff I still need… a white crystal, a cyan-blue crystal (that isn’t endurance), and the throne and Meditation chair from the last pack 🙁

For reference, the only mount I got was the Longspur Pacer… pets I got–the ones that have pictures and say so in the pet check list, and I didn’t get any titles, emotes, or moods v-v

Duhtect surprised me with a Tundra Nekarr Cat! T~T WHICH MEANS MY PET COLLECTION IS COMPLETE AGAIN. YAAAAY. 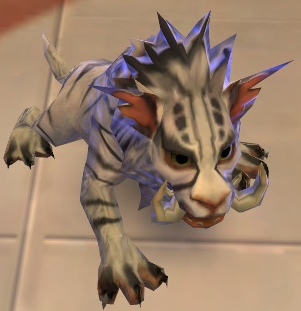 And now we’re doing HM TfB @-@ I got gloves and all the HM Survived by titles so yay! Too bad it’s not a DKP run though–maybe I could’ve used some of it already. 😛 But oh well, at least I got something.

And then we even went to Dreadtooth 😀 YAYNESS. And Tourch was nice and gave me the mask so now I have part of the puzzle! WOO.

And even my boyfriend got to come <3