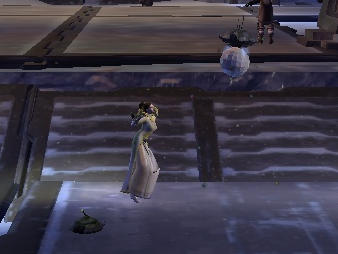 The Galactic Party Bomb can be positioned kind of like Force Quake (Consular AOE) and Salvation (Sage AOE Heal) or like throwing the Hutt Ball. Then, a UFO-like little robot comes out with a disco ball and flashes lights, plays some music, and has pretty lights shining around.

That is pure awesome.

I did find out that the item I thought the Galactic Party Bomb was happens to be called the Party Instigator. It is only 10K and requires Social Level 5, so I stopped by Balmorra (You can buy it on Taris on the Imperial side) and picked it up too.

Anyway, I have decided that the first Legacy item I will buy is the repair droid for 1 million. Obviously, I will still need to save up as I’ll be about 400K short to buy it right away along with Taunta and the emergency 100K for various things.

After that, I will probably save up for the Neutral Market then go for the Mailbox. Then of course, both dummies. After that? Probably the Rocket Boost. Then various cooldowns and last, but not least, the two races I’d like to get. So still lots of preparing to do.

It’s too bad I couldn’t get the speeders before their prices raised though. At least I got the ones retiring, however.