Now, when I have free time (or even when I don’t because multitasking rocks), I periodically look through the SWTOR forums for any news on pets. They are my number 1 priority in the game (and part of why I make such a big deal about Karagga’s lately).

Unfortunately, I have had no luck finding much information and when I made a topic to work together…it was deleted 🙁 On top of that, I could find no info on the Orobirds–just people talking about the Tauntauns (which I love as well, but all pets deserve love!). I did, however, recently stumble upon this topic which not only talks about Tauntauns, but the Orobirds a little too.

And if that wasn’t enough, recently mentioned were 3 different kinds of Rakling pets: Crimson, Pale, and Midnight. The question now is “Are they currently available?” or if they are just data in the game for something that is not available yet?

Regardless, I’ll be adding them to the pet list shortly.

There’s also 4 current Orobird eggs known: Unusual, Mysterious, Wonderous, and Orobird. Nobody has actually found the eggs ingame as far as I know, but I won’t actually separate/specify the Orobirds on the list until I have specific info on each. Afterall, just because 4 eggs were found in the data doesn’t mean they are all available, so for now the general Orobird (with separate ones as we learn information like I did for the Tauntauns) will do.

But yes, if the NYSCCS (A new item sold at the vendor you get the grapple hook from on Alderaan starting from 1.2 onward) isn’t used in some way for at least the Tauntauns, I’d be very surprised. 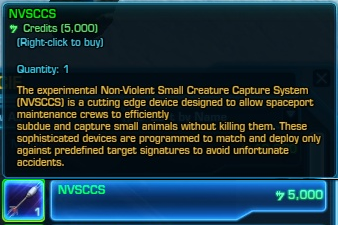 One thought on “Let’s Talk About Pets”