So, I actually waited up to see when Gargath would spawn. It seems the spawn time is now 4 hours which sucks. And he was apparently killed 20 minutes before we got there. I ended up talking with various Imperial people and the person I had spoken to earlier who had some back said if I still had my group, we could go, but I explained everyone left and I doubt I could get another group together, but appreciated the offer.

And of course, Taunling drops. The Exotic Animal Crate dropped. It dropped -right in front of me- and dear god did that hurt. I wish I could be like “oh, no big deal” and in some ways it isn’t–like I don’t care if now I won’t be first on the server, but to know that it had dropped it and it could’ve been the one we defeated is a horrible feeling. I wouldn’t have to keep camping him–it’d be something down and yet it’s not. 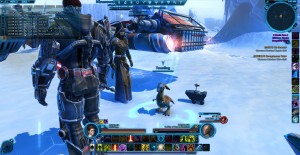 Overall though, I think the one word I can find myself feeling is “broken”. I don’t think I can describe it anymore than that. I guess I should try to get some sleep now… regardless, this is going to make every failure hit even harder and hurt worse by the second.

Edit: how it’s gone today:
1st Gargath attempt – no drop
2nd Gargath attempt – it drops. nearly everyone needs. I got an 87. Beaten by 8 points due to a guildmate getting a 95 T__T I guess I’d rather him win than someone random (and the only reason he rolled need is as he saw random people doing so), but being that close and losing sucks 3rd Gargath Attempt – No pet drop. Dropped the Ice Scrabbler Jerky though…but bleh.