The following things are not actual Vanity Pets in that they either:
A. Do not last forever
B. Are not learned.
C. Require to be in your inventory to use.
and/or
D. Do not follow you.

Items you can Buy

The most common one mistaken as a Vanity Pet is the Rhythm Augmentation Droid:

You can buy it from the Security Key Vendor for 55,000 Credits. The Droid lasts for 5 minutes, must be in your inventory to be learned, and does not follow you. It just stays wherever you summoned it playing music (although, it may follow you up elevators and/or through map changes…and then stay still again). It can only be summoned every 30 minutes.

The Galactic Party Bomb costs 100K and requires Social Level 10. You can buy it on Ilum. When summoned, it plays music and causes people nearby to dance. It lasts 1 minute and is on a 5 minute cooldown.

The The Training Droid: 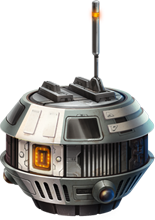 The Training Droid is gotten from the Digital Deluxe and Collector’s Edition versions of the game. When you click an enemy, it will encircle the target for 30 seconds. Must be kept in your inventory to use. 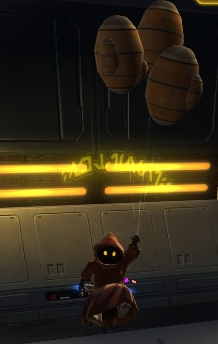 The Party Jawa was given to anyone subscribed when Free to Play hit. It lasts for 1 minute and has a 3 minute cool-down. While it does follow you around while encircling your character, it doesn’t stay permanently spawned and, like most of the items here, has to be in your inventory to be used.

Summoned through Quests
Firstly, if you are Scavenging, there are various robots throughout quests and flashpoints you can repair that will follow and battle for you. They most commonly look like Battle Droids, but will sometimes actually be a Medical Droid who will heal you. They last 5-10 minutes.

Next, if you’ve done Kaon Under Siege and the Black Hole Daily Eyes and Ears (not sure what the Imperial equivalent is or if there is one…), you may be familiar with a cute little Interrogation Probe that shines a pretty light. A normal Flash-light for Kaon Under Siege and a Green light in Eyes and Ears. These probes, despite not having a timer, can only be used in certain areas. Kaon Under Siege’s is given if you are first to enter an area that gives it OR if you summon one from a box. Eyes and Ears gives you it as you enter the area. Once you leave the appropriate areas in either, they go away.

Finally, in Athiss, there are various Snarlroots lying around. They require Bioanalysis at atleast level 75 to harvest and if you do harvest them, you will get an item called Unique Pheromones. When used, these will summon a Alchemical Snarler who will follow you and battle for you. 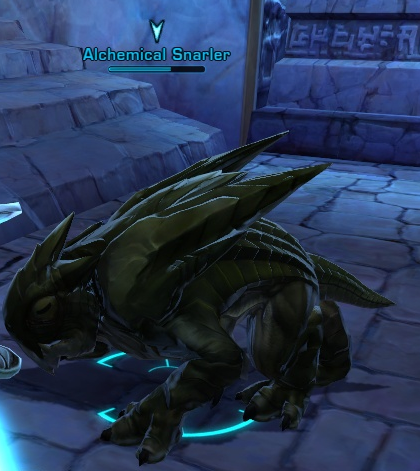 They look like mini versions of some of the various mobs in the instance. They last for 10 minutes and while you can only summon one at a time, you can stack up on the Unique Pheromones. However, the Unique Pheromones disappear (as does the summoned Alchemical Snarler if you still have one) when you exit. One amusing/cute thing is since they battle, you can actually heal them AND put a bubble and look how cute they are with this mini bubble: 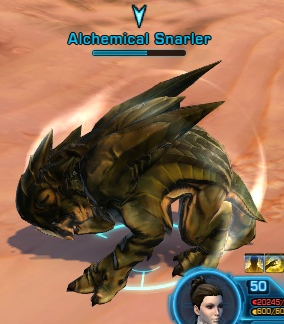 Field Mail Droid – Unlike the above, the mail droid will always look the same. Only thing that changes on ranking up is the cooldown time (45 minutes, 30 minutes, 15 minutes). These look like the Probe Droids that scan you at various places.

Ship Repair Droid – This looks just like the Rank 1 Field Repair Droid. It sits in your ship (Usually the Engine Room or the Cargo Bay depending on what your ship has).

Cartel Market Items
Holo Rancor – It’s just…a giant Holo Rancor. You can place it every minute and it lasts 30 seconds.

Remote Control Spaceship – A Spaceship that hovers around you for 2 minutes :3

Jawagrams – You can summon on yourself or on someone else by clicking them. After a cute animation, the Jawa will actually follow you around for a little bit.